– From The Rocky Horror Show‘s “Time Warp” (here, performed by the cast of Glee)

Until last Monday, I was a Rocky Horror virgin. I’d always wanted to watch it and just hadn’t ever gotten around to it. But with Glee doing aRocky Horror episode last week, I decided it was time to take the plunge: I streamed The Rocky Horror Picture Show via Netflix on Monday night, watched Glee on Tuesday night, and then went to a live production of the show on Friday night, in Brooklyn, MD. 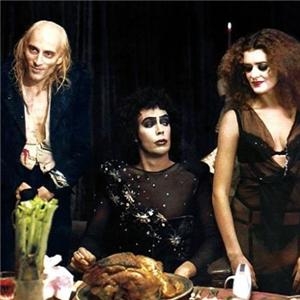 I loved all three shows

The differences from version to version are interesting, but I think that what’s always the same, always front-and-center, are the music and the “for outcasts” nature of the production.

I loved the movie version because, aside from the quirky, fun, weirdly entertaining storyline, we have Tim Cury’s amazing performance as transvestite and leader of the aliens Frank-N-Furter. And while Susan Surandon (as Janet) isn’t particularly phenomenal, she doesn’t exactly suck either. Well…she might have sucked in that scene with Frank, but that was kind of vague. ;-) Anyway, I won’t talk about the whole cast, but I will just say that, generally, it is a good one. Moving on…

I liked the Glee episode because, as usual, they managed to tie the themes of the music into the themes and storylines of the TV show itself. Emma’s rendition of “Toucha Touch Me” is one of my favorite covers from the episode; I think she kind of stole the show, actually. Who knew actress Jayma Mays could do that? As far as I can remember, she hasn’t sung on the show until this episode. And, of course, having Britney and Santana step in as Columbia and Magenta was just perfect!

Finally, while the movie and Glee versions are great to watch and even sing along to if one feels so inclined (and knows the words), the live show is a whole different beast. It’s completely interactive. You get a prop bag and have to do things like pop a balloon, cover your head with a newspaper, wave a glow stick in the air, throw a sponge on the stage, and so on. You’ll hear people in the audience shouting out lines and talking to the cast, and the cast will shoot witty responses right back. And you’ll get to do the Time Warp, which, while I’m not a fan of dancing, is kind of fun to learn if you’re a newbie.

Going into this week, I’ve still got the songs stuck in my head. I imagine they’ll fade with time, but come next Halloween season, I’ll be ready again.

*NOTE: This blog entry is syndicated from a blog I had to start for my Electronic Publishing class at U.B. this semester. I may or may not delete the extraneous blog when the class is over, but I thought I would at least give my readers the opportunity to read the contents of that blog indefinitely.